Aviation and especially OTP management is a complex matter, that’s a truism in the industry. Ultimately, the complexity of the daily flight operations is about coordinating countless parallel processes, compensating for disruptions and anticipating them as early as in the planning stage. This creates conflicting goals and different interests of various stakeholders, all under the umbrella of economic constraints. If massive external shocks, such as the corona virus, are added on top of that, the situation becomes even worse. It is therefore all the more important to create robust planning and find the right balance between the major determining factors, punctuality, quality and costs.

Hardly any other industry is as susceptible to disruptions as aviation. This applies on many levels. The strategic and tactical goals can often no longer be achieved if events such as protracted tariff conflicts or strategic route planning fail. External shocks such as the Corona virus place a heavy burden on the entire global industry and sometimes even lead to the withdrawal of some market participants – analysts often speak of a market shakeout.
However, excluding dramatic external shocks, it is much more common to tackle the unplanned smaller deviations in the daily business. Bad weather, delays from other airlines, short-term sick notes, technical problems and many other causes ensure that practically no day goes as planned and requires short-term rescheduling or re-allocation of tasks, staff and resources. Over the past years and decades, three key factors have established themselves as pivotal points to achieve OTP. A large number of operational decisions can be made on the basis of considering and balance them. In total, they can be used as a rule of thumb when making decisions. 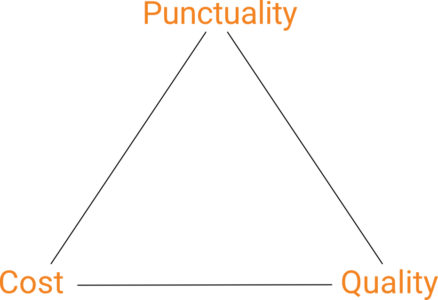 The first key factor is punctuality. For many end customers, it is the first thing they think of when having to name their personal key factors for a good performance. Of course, there are also many good reasons for an airline, an airport and all ground handlers to give punctuality their top priority. First, there is the general impression the customer gets of the performance – take a normal flight as an example. An important share of this general impression is if the flight departs and arrives on time, so the airline can be regarded as a reliable and punctual service provider. If that’s not the case, it quickly has a negative impact to the image of the brand. The same applies to airports and ground service providers whose customers are airlines. An even more solid argument is that of the sheer costs. Delay means almost instant costs that increase almost exponentially with increased delay. Large hub carriers and their service providers understandably place OTP as top priority, including punctual departures and arrivals of course. Punctuality at all levels is essential for hub operation with its connecting flights. There are only limited possibilities for an aircraft to make up a delay over the next few flights again, like a special permit from air traffic control to take a shortened flight route, the allocation of an earlier slot before departure, or simply, to fly faster. But the most efficient way is not to let delays even happen, provided that it can be influenced.

The second key factor which influences the entire daily operation heavily, is the cost. Classical carriers are competing with budget airlines and each competitor must think twice about their budget. As a result, services that were previously taken for granted have long been erased due to saving measures. By now, we have gotten used to this new way of travelling: self-service check-in, extra luggage fee, no free beverages, no in-flight entertainment, no blankets and pillows – these are just some of the visible changes from the passenger’s point of view. Over years, saving potential across all areas have been identified and programs for cost cuttings and cost efficiency have been rolled out. This has been a great benefit for the customers, as flying has never been as cheap as today, especially when comparing it to the average household income. The per-mile cost of flying has been chopped in half between 1979 and 2011, adjusted for inflation. That’s why airlines today are extremely creative to generate every little piece of additional revenue they can get. Besides, they are true efficiency masters. But also, a penny saved is a penny earned: especially budget airlines try to identify and chop off all unnecessary spending they possibly can to be able to offer tickets at extremely low prices. At the same time, they need to take care that their punctuality is not harmed. To do so, they avoid all cost-driving complexities that are part of the business model of classical carriers. They don’t work with hubs and connections but only do their point-to-point flights to keep their business and processes simple. In addition, they also make certain cuts in quality.

This takes us to the third key factor – but what does it ultimately have to do with OTP? Let’s specify what quality is. There are, from my point of view, two ways to define it. The first one is the passenger expectation: if the flight is punctual, the meal is hot and tasty, the seat is comfortable, and the cabin crew is friendly and professional. If you pull the scope a little wider, you have the entire passenger journey: How was the parking lot at the airport? Did you have to stand in line at the check-in, or have a self-service check-in? Did it all go smooth at the safety area, was the boarding timely and well-structured? Was everything clean? All fine with the baggage? Often, a quality promise for us is related to the image of the brand. In the case of airlines, end users often expect more from long-serving and worldwide-operating classical carriers such as American Airline, Delta, Lufthansa, Qantas or Singapore Airlines. The higher they are ranked in specific annually published quality rankings, the higher the expectations are.

Quality undoubtedly plays an essential role for airlines – quality not in the sense of a hard-to-measure, highly subjective variable, but in the sense of the nature of a product. The second way to define it is to check if these specific quality standards are met. Each airline determines how long the turnaround times are, which catering concept is used, to what extent connecting flights are to be reached and so on. All three key factors are all related and interdependent: if parameters of one change, the others inevitably change as well, comparable to the principle of communicating tubes, as we learned in physics education. If the catering is reduced, the costs decrease. If the rate of unpunctual flights increases, the costs increase as well. If lower Service Level Agreements (SLAs) are agreed for baggage, punctuality and the perceived quality of service for the passenger often decrease. In turn, if more money is invested – which mean increasing costs – then quality or punctuality will also improve.
It depends heavily on the strategic direction of the airline which factor they put their focus on. For example, it is common knowledge that low-cost airlines place the strongest focus on low costs and accept lower service quality in turn. The catering is minimal or only available as buy-on-board items. Strict upper weight limits for luggage or parking positions far outside the terminal also mean a loss in quality, but this is usually accepted by the passengers without complaint. On the other hand, a classic carrier offers a usually higher ticket price, but a better service infrastructure as well as the coordination of connecting flights.

Obviously, the decision-making processes for a better OTP are made in a complex environment with a lot of variables to consider and to balance. It’s almost a miracle that the basic situation can be visualized with such a simple graphic. Time to make the right decisions!